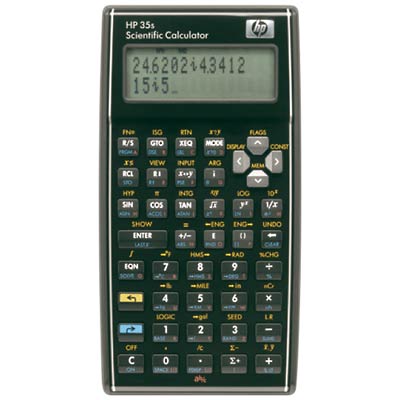 The HP-35S was released to commemorate the 50th anniversary of the original HP-35A calculator's release. It contains some departures from previous HP calculator practice, not least being the absence of the rectangular <–> polar transformations. This made it less suitable for surveying use, but this could be overcome with suitable programming. It allowed a program to jump to a specific line number, rather than only a label, which made programming more flexible.

We have a large number of programs for the HP-35S. They are all available as PDF files. Click on the blue link to open a new window with the PDF displayed.

There are also some PDF files with general advice, links to HP training, and other useful links to things about the calculator. If you've lost your User Manual, you can download a copy from here.

(Strange as it may seem, the links are the green text!)

1. Closure with Area (and optional Co-ordinates) [with complex numbers]

1A. Closure with Area (and optional Co-ordinates) [no complex numbers]

1B. Closure with Area, optional co-ordinates and proportional misclosure [no complex numbers]

4A. 2-D Co-ordinate Based Intersection Program [no complex numbers]

5A. Closure with Area, optional Co-ordinates and ability to handle curves and the areas associated with them. [no complex numbers]

6A. Crandall's Adjustment for a Closed Traverse. [no complex numbers]

[This program converts ground measurements (angles and distances) to Transverse Mercator projection 'plane' measurements, so that a traverse may be computed using conventional plane methods.]

SPCS 1983 Transverse Mercator Base Data (all relevant states and zones)

SPCS 1927 Transverse Mercator Base Data (all relevant states and zones)

[This program converts ground measurements (angles and distances) to Lambert Conformal Conic projection 'plane' measurements, so that a traverse may be computed using conventional plane methods.]

SPCS 1983 Lambert Base Data (all relevant states and zones)

SPCS 1927 Lambert Base Data (all relevant states and zones)

All the SPCS Base Data in an Excel Spreadsheet

OM 1A. Convert Oblique Mercator Co-ordinates to and from Latitude and Longitude [no complex numbers]

1A. Calculate a Radiation from Two Offsets [no complex numbers]

1A. Solve all the Parameters of a Circular Horizontal Curve, given any two Parameters [no complex numbers]

2A. Compute Values for a Parabolic Vertical Curve [no complex numbers]

2A. Azimuth and Distance from Co-ordinates (Inverse) [No complex numbers] Much requested!

These programs were developed on request for a set of specific calculations for machine-shop work. Get them here.

1. Roots of a Quadratic Equation [includes complex numbers] This program allows you to solve any quadratic in 'standard form', giving solutions for real and complex roots.

2. Roots of Complex Numbers [includes complex numbers] This programs allows you to find the roots of any complex number, using De Moivre's formula.

1A. Plane Triangle Solutions. This program covers all 5 cases, with a 'menu' style beginning to chose the solution to be used. Quite a large program, but only 1 label! [no complex numbers]

OM 1A. Convert Oblique Mercator Co-ordinates to and from Latitude and Longitude [no complex numbers]

Complex Numbers? Nothing's ever simple, is it? Not even numbers!

The HP-35s has the ability to address up to 801 storage locations beyond the basic 26 A..Z locations, the 6 statistical registers and the 4 stack locations. However, the locations must be addressed 'indirectly'. There are also some considerations to allocating and de-allocating memory, which you should be aware of if you are programming in a way that uses these indirectly addressed memory locations. See the document Programming and Working with Indirectly Addressed Memory on the HP-35s for more information about this, and some code to help with allocation and de-allocation of this memory.

Free Training! HP offers Computer-based Training, virtual classrooms, downloadable material and other good stuff to help you get the most from your calculator. Click on the links below to get to the HP calculator website. There are links there to get you around what HP have on offer. At present, the offerings for the HP-35s are limited to Usage Guides, but this may change over time. There is a basic CBT module for the HP-35s, available for both PC and Mac.

Although the HP-35s allows you much more flexibility with labels, there is a trick to get one more program in. Write the program so that it is at the very top of program memory, i.e., press GTO . . then press R/S. This is documented in the manual.

As you can do something like XEQ Z057 and run a program starting at that line number, there isn't a lot of need for this trick, provided you can remember the starting line numbers! One approach is to have a simple 'menu' that allows the user to pick from a series of options, displayed one at a time, and upon the choice being made, jump to that line and execute. This is the approach taken with the plane triangle solution program.

Some Documents to help you Program the HP-35s

Complex Numbers, Vectors and Co-ordinates: Getting the Best from the HP-35s.

Programming and Working with Indirectly Addressed Memory on the HP-35s.

Special Item!! With the release of the the HP-35s, we have to re-think how we deal with 2-D spatial location data, because the traditional decomposition of traverse data from azimuth and distance into rectangular components is not easy to implement on this calculator. This represents a major change from the lineage that stretches back to the HP-25 of the late 1970s.

This website will be updated as I write more software for the HP-35s, and convert other programs to run on this calculator. So check this site out from time to time to see what else has been added.

A full list of known bugs in the HP-35s can be found at the location below. If you are having problems, check this list first. Note that these are all pretty off things, except COS(x) with x close to 90°, and similarly TAN(x) with x close to 90°. Special thanks to Paul Dale and the HP Museum.